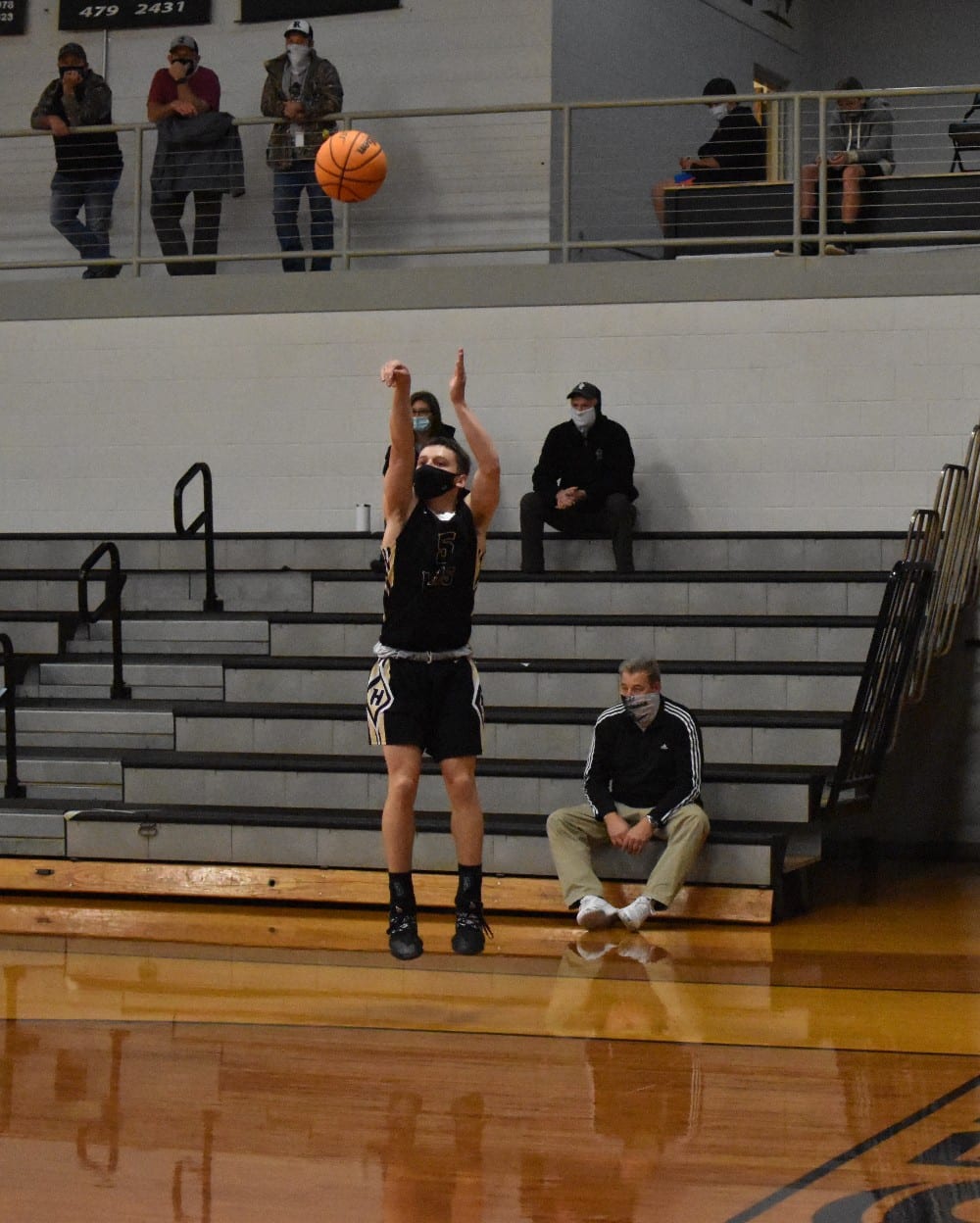 The Hayesville Yellow Jackets traveled to Graham Co. to take on the Robbinsville Black Knights on Friday night. While many in the conference ended up being snowed out, these two teams put on a show. It was a hotly contested game that was back and forth for much of the first half. Hayesville took a lead into halftime but Robbinsville chipped away at it in the second half. The game ended up going down to the final minute. Behind star point guard Kolbe Ashe’s 32 points the Yellow Jackets were able to pull out a tough road win 60-56.

In the first quarter Hayesvilles offense got off to a slow start. While getting some good looks they just couldn’t get anything to fall. Head Coach Michael Cottrell did a full five player swap hoping to get their energy going. It worked out well and while the Jackets entered the 2nd quarter down 11-9. The second unit brought the team’s energy level up and catapulted the team into a great second quarter.

In the third quarter it looked to be much of the same for Hayesville who looked like they may run away with it. Then Robbinsville started to get hot and seemingly couldn’t miss a shot. As well the few shots they did miss they seemed to get almost every offensive rebound. It was a very physical game, something to be expected when playing the defending football state champions. While the Hayesville lead got all the way up to 13 by quarters end the Black Knights had drawn within five points.

Going into the fourth quarter Hayesville knew they were in for a battle. Many casual Hayesville fans may have wondered after losing some players to transfer who would be the go to guy this year. Kolbe Ashe answered that question in a big way carrying the Yellow Jackets in the game. Especially the fourth quarter where he had 12 of the teams 17 fourth quarter points. In the last four minutes of the game Hayesville went four low leaving Ashe up top by himself to go iso. It worked great for the Yellow Jackets as Robbinsville had no answer for Ashe.

In the closing seconds of the game when Robbinsville was fouling Hayesville to try and get back in it. Hayesville responded by hitting some clutch free throws. Going 5-6 in their last six attempts was huge with Ashe hitting two, and senior Blake McClure hitting two as well. This allowed Hayesville to survive and win against a tough opponent on the road 60-56.

“Great win on the road against a really athletic hard fighting Robbinsville team.”

“Very typical of what happens when you come up here in the Smoky Mountain Conference.” “They play you, a very competitive league, away games are always tough, especially tough for us.”

“I was very proud of our team for figuring it out late, winning a game on the road which will help us later.”

“You have to win on the road to be in the hunt, someone will lose one up here, a good team will lose up here, you have to come to play when you come to Robbinsville.”

Hayesville (2-0, 1-0), will next play on Monday, January 11th at Murphy (0-1, 0-1). To get updates or see how the Yellow Jackets have done tune in to all the latest coverage FYN sports on Facebook, Twitter, Instagram and at https://claync.fetchyournews.com/category/teamfynsports