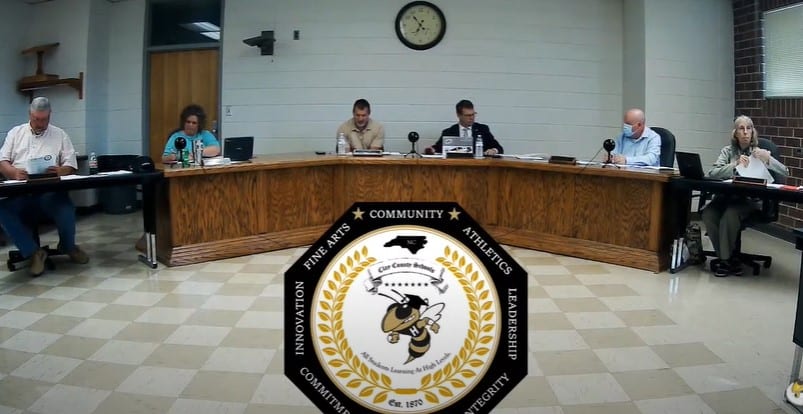 HAYESVILLE, Ga – Following a year of unknowns, students in Clay County Schools showed resiliency and ability to bounce back despite the pandemic.

At the start of the year, diagnostic tests revealed that online learning had significantly affected math scores. Some grades were more affected than others. Principals from each school presented the end of the year assessments for reading and math.

In K-2, overall, the scores increased in tier 1 (proficient or exceeding grade level) from 32 to 69 percent and tier 3 (at-risk) students dropped from 6 to 3 percent. Kindergarten jumped to 95 percent in tier 1 and the goal is typically 80 percent of students at proficiency.

In Math, proficiency for K-2 increased from 19 to 66 percent and at-risk students dropped from 5 to 2 percent.

Hayesville Middle School completed the I-Ready diagnostic before Spring Break, so a little earlier than the primary and elementary schools. Principal Heather Plemmons spoke about the need to find methods to properly motivate middle school students to complete and do well on tests. She thinks the approach to motivating children needs to improve to alleviate diagnostic stagnation.

Math indicated a slight gain in tier 1 with an increase of 2 percent from 33 to 35 percent. At risk students decreased by 1 percent. Sixth grade math had the biggest improvement with 39 percent testing at proficiency up from 29 percent. Seventh grade proficiency decreased from 36 to 32 percent and at-risk students increased from 32 to 36 percent. The students three or more grade levels behind grew by 10 percent. Eighth grade had another slight increase in proficiency from 32 percent to 36 percent and at risk dropped from 46 to 38 percent.

Around 15 remote learning students at the middle school often opted to not take the diagnostic tests. Most likely, they didn’t have anyone ensuring they took the test. Clay County Schools only had students in person for four days a week for one period and hopefully, next school year, it will be easier to find struggling students.