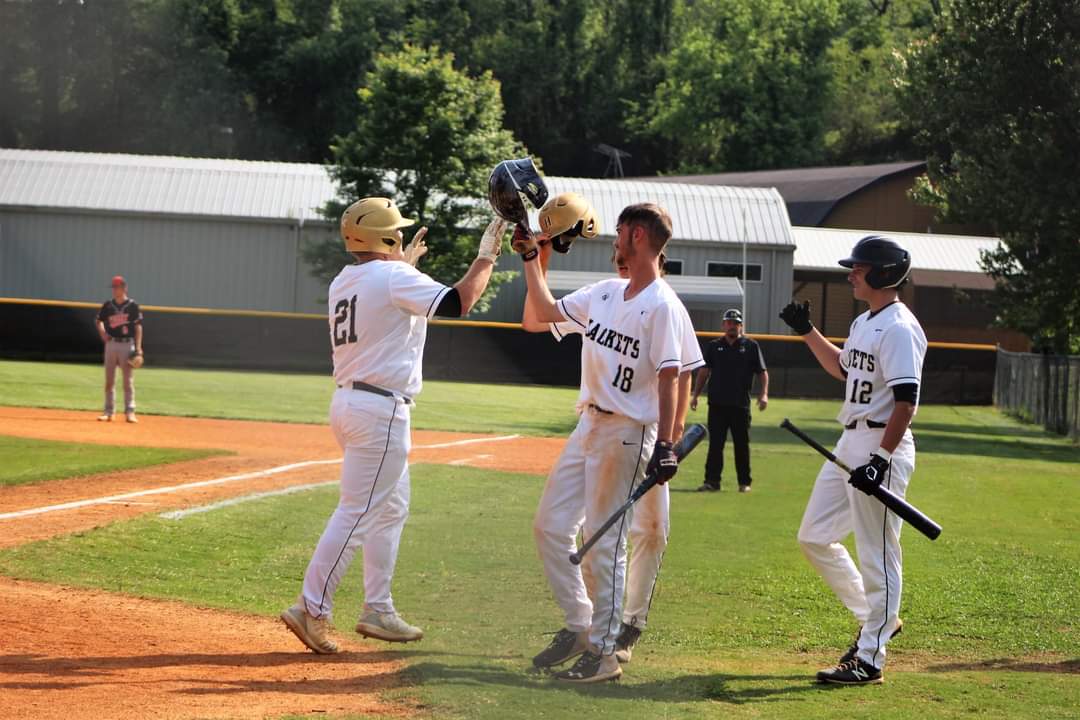 The Hayesville Yellow Jackets played their first home game of the year on Friday, hosting Rosman. This was their second matchup of the year, with Hayesville winning the first game 8-1. This game was much of the same with the Yellow Jackets dominating from start to finish. The game only took 5 innings as Hayesville run-ruled Rosman winning 11-0. 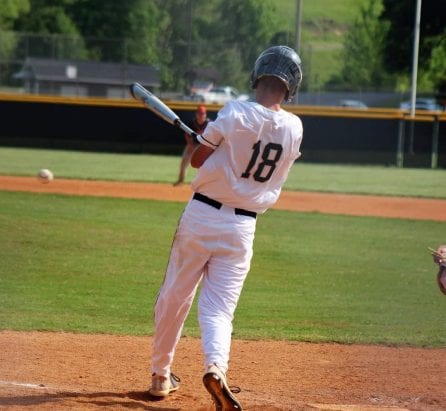 Cade Denton drives one for a hit.

It was another dominating performance on the mound for Jeremy Stewart as he pitched all five innings in the game. He did not give up a single run in the game, and only gave up one hit the entire game. Also striking out six batters on the day several to get out a few minor jams, Stewart gave Rosman almost no chance. The Yellow Jacket defense did struggle with three errors for an unusual defensive performance from their usually strong defense. Yet Rosman could never capitalize going scoreless for the day.

Hayesville had another strong day offensively scoring 11 runs in just 4 innings. After getting held scoreless in the first Hayesvilles offense exploded for 4 in the 2nd inning. Following that up with 5 in the 3rd inning and 2 more in the 4th inning. The Yellow Jackets offense was paced once again by Connor Bradley. He had 2 hits on the day a double and monstrous grand slam, in all he had 5 RBI’s on the day. One has to wonder what kind of crazy home run total Bradley might put up if Hayesville was playing a full season. As is he has 5 home runs on the year to lead all of 1A NC baseball. Bradley Also leads the state in batting average at.731 and runs with 16. 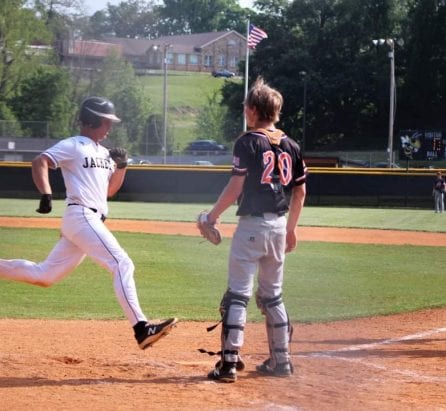 Kyle Lunsford scores a run as a part of his big offensive day.

Besides Bradley, it seems on any given day the Yellow Jackets will strong performances from anyone in their lineup. On Friday it was Kyle Lunsford and Peyton Hunt, who both had two hits, two runs, and Hunt had 3 RBI’s on the day. Performances like this are what is making Hayesville so dangerous this baseball season. The conference knows what Jeremy Stewart and Connor Bradley bring to the Hayesville team. Hayesville though is getting strong performances regularly from players like Clayton Vandiver, and Avery Leatherwood to go along with Hunt and Lunsford.

Hayesville is now at the halfway point of their season games-wise, remaining undefeated at 7-0. They have a one-game lead in the conference standings over Murphy. They are in control of their own destiny at this point and rank 2nd in all of 1A baseball. Their next game will be an important one as they host the Andrews Wildcats on Monday. The Wildcats are on the rise this year currently sitting at third place in the conference. To get updates or see how the Yellow Jackets have done tune in to all the latest FYN sports coverage on Facebook, Twitter, Instagram, and at https://claync.fetchyournews.com/category/teamfynsports