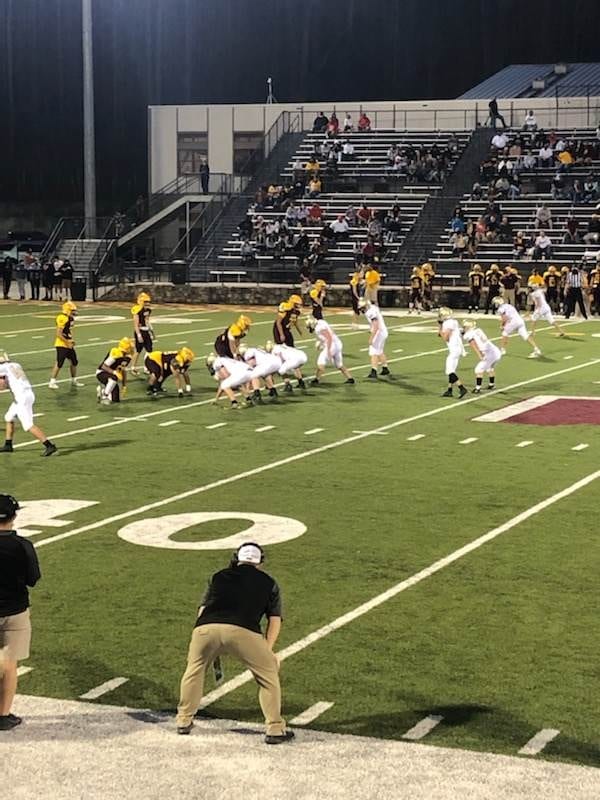 The Hayesville Yellow Jackets traveled Cherokee Friday night to take on the Braves looking to pick up their first win of the season. Yet some special team miscues and mistakes gave Cherokee a big advantage on the night. Hayesville’s defense was on their heels as well most of the night with Cherokee having a big night passing. Ultimately the Braves won the game 42-17.

Cherokee received the opening kickoff and picked up a first down on the opening drive. Their drive ended though on third and long with a sack by Blake McClure. On Hayesville’s opening drive they picked big 3rd and 4th down pass completions to keep the drive going. Logan Caldwell came out playing much better than he did last week. Hayesville could not pick a second 4th down completion turning the ball over on downs. Cherokee took over on their own 35-yard line. Cherokee’s 2nd drive of the game was a good one, partly due to a Hayesville personal foul. The first quarter ended 0-0, with Cherokee inside the red zone.

The Braves got to the 2-yard line on their first play of the quarter on an outside run. Yet with two tackles for loss in a row followed by a sack all by Blake McClure, it made it 4th and long. Cherokees QB though made a spectacular 4th down throw for a touchdown to put Cherokee up 7-0. Hayesville got a huge third-down completion on third and long from Logan Caldwell to Kyle Lunsford. Followed up two plays later by a 46 yard Blake McClure run to tie the game up at 7-7.

On the very first play of the next Cherokee drive, Hayesville forced and recovered a fumble to get the ball back. After Hayesville’s drive stalled inside the 10-yard line we saw the Yellow Jackets hit a field goal to take a 10-7 lead. On Cherokee’s next drive they got a couple of big runs by their QB before hitting a deep ball to take the lead back 14-10. Cherokee surprised Hayesville with an onside kick and got the ball back. They got a big pass on first down to take it down to Hayesville’s 12-yard line, followed up two plays later with a pass to the 1-yard line. They punched it in on the next play but the extra point was blocked to make the score 20-10 taking it into halftime.

Hayesville’s opening drive ended quickly with an interception taken all the way down to Hayesvilles 5-yard line. With the great starting field position Cherokee punched it in quickly and got a 2 point conversion to make the score 28-10. Hayesville went 3 and out on the next drive giving it back to Cherokee. The Yellow Jackets got an important turnover though on Cherokee’s first offensive play getting the ball back. Hayesville could not get much going though giving the ball back to Cherokee after a turnover on downs. Hayesville did finish the quarter off though by getting another score to make it 28-17.

Cherokee opened the quarter by scoring a touchdown to take the score to 35-17. Hayesville’s time was running out in the game were need some big plays quickly. Yet a 3 and out was the result of their drive and Cherokee got the ball back. Hayesville did force Cherokee to punt but the punt hit a Hayesville player in the back and Cherokee recovered it to get the ball back. There was not much time left in the game at this point as Cherokee was able to bleed out most of the clock. They got one last score with 50 seconds left in the game making the final score 42-17.

Team FYN Sports will be live broadcasting next week on April 2nd when Hayesville hosts Rosman. To get updates or see how the Yellow Jackets have done tune in to all the latest FYN sports coverage on Facebook, Twitter, Instagram, and at https://claync.fetchyournews.com/category/teamfynsports