HAYESVILLE, NC – The first I-Ready diagnostic showcased the learning loss impact associated with online learning, but the mid-year tests displayed across the board improvements.

At Hayesville Primary, the tier three students, or those at least two years below grade level, decreased by three percent from the August diagnostics in reading. The students at or above grade level, tier one, increased by 10 percent in reading. First grade reading earned the greatest increase by 11 percent.

At the halfway mark, reading was a little behind on median progress at 38 percent. Typically, the administration likes to be at 50 percent at this time of year.

Superintendent Dale Cole reminded everyone that last year from March on all students were fully remote and they started the 2020-2021 school year with only two days of in-person learning. Later in the Fall term, North Carolina moved to four days of in-person instruction with one remote day.

Hayesville Elementary School, grades three through five grew into tier one by 17 percent and shrunk tier three by nine percent. Third grade significantly expanded tier one from 39 to 72 percent in reading.  As for math, tier three students dropped by 12 percent and tier one increased by 20 percent overall. Fourth grade math reduced tier three students by 28 percent, moving several students out of the at least two years below grade level category.

At the Hayesville Middle School, they too saw a drop in tier three students by five percent overall in reading. Seventh grade achieved the biggest increase to tier one by 11 percent. In math, tier three decreased by 4 percent overall. Sixth grade experienced the most significant drop in tier three while seventh grade substantially grew into tier 1. However, eighth grade tests appeared stagnant due to difficulty getting students to participate, only 61 of 95 students took the I-Ready diagnostic.

Hayesville Middle Assistant Principal Heather Plemmons commented, “If the pandemic has shown use anything, it’s the value of teachers.” 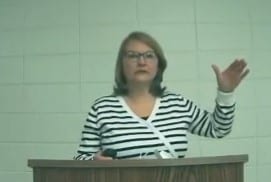 The high school presented the fall term end of course test (EOC) scores in biology, English, math, and ACT/Workkey.  In biology, 57 students took the test and 56.14 percent were proficient. Out of that number, 21 were predicted to not meet the standards. The school looked into the four people who were expected to test well and found that 2 were remote students.

In english II, 39 students took the EOC and 38.46 tested proficient. Three more were expected to earn a passing grade and one of those was a remote student.

The ACT/Workkeys had a 74.68 percent proficiency which was a 13 percent increase over a two-year period.

All schools are working to continue to improve students’ knowledge and test scores through after school tutoring and check-ins. The high school also has mentoring programs with 12 mentors and 78 students participating. A credit recovery program is also in place for high school students that didn’t pass their EOC. Essentially, under the guidance of a teacher, students can work on the standard that they didn’t earn a passing score, and retest just for proficiency in that standard. The program keeps students on track to graduate.