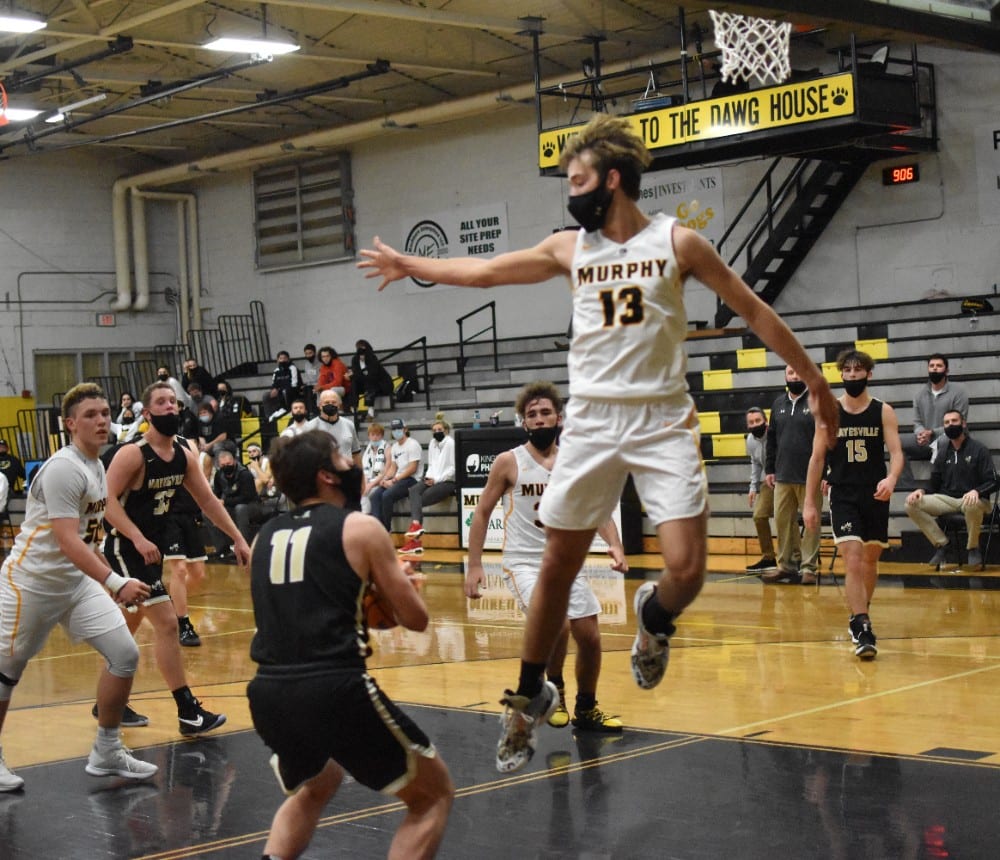 The Hayesville Yellow Jackets traveled to Murphy on Tuesday night to take on their rivals the Murphy Bulldogs. While in the past few years Hayesville has dominated this match up, you always have to come ready to play when facing a rival. The game was a close one throughout with Hayesville sustaining a narrow lead for the majority of the game. With some solid free throw shooting and good ball control Hayesville was able to secure a 64-56 win on the night.

In the first quarter Hayesville was executing well on offense and rebounding really well. Hayesville got scoring from five different players in the quarter. Led by Paul While who had 7 first quarter points. Hayesville after having been roughed up by Robbinsville in their last game came ready to be more physical in this contest. They did not shy away from the contact and there was plenty of contact from the first quarter all the way through the fourth quarter.

Hayesville carried an 18-11 lead going into the second quarter and appeared ready to extend their lead even further. That is until Murphy’s Dillon Brown got hot off the bench, scoring 13 2nd quarter points to keep the Bulldogs in it. Hayesville’s defense was focused on Murphy star Abram Abling leaving Brown several open looks from three. Credit to the Jackets though because after the half, they made adjustments and held Brown to only two second half points.

At the half Hayesville had a 33-28 lead and it looked to be anybody’s game. In the second half though Hayesville was getting steady contributions from multiple players. Each time Murphy made an adjustment it seemed another Hayesville player would step up. One of those players Brady Shook, had one of the better nights of his career. Shook scored 12 points and had a bunch of rebounds but possibly most importantly played great defense on Murphy’s star Abling all night. While Abling did have 19 points but he had a low percentage from the field and took lots of shots to get that 19. Hayesville ended the third quarter with a 48-41 lead.

Brady Shooks fights off a defender for a tough 2 points.

Going into the fourth quarter Murphy’s bench received a technical, gifting Hayesville two free throws and possession to start the quarter. This hurt the Bulldogs as it allowed Hayesville to extend their lead even more. Making the Bulldogs comeback attempt that much tougher. The game was incredibly physical and while no flagrants were called on the night several times referees discussed the possibility. Fans on both sides probably wanted a few flagrants called, yet it’s early in the year and just as the players are getting into their groove, so are the referees.

Hayesville possessed the ball well and hit their free throws down the stretch. This allowed them to handle any comeback attempt and put the game away winning 64-56 over their rival.

“Thought it was a very good road win”

When asked about Brady Shooks performance

“That’s what we expect to see and that’s what we have been seeing in practice. Was glad to see him play well he had a really tough assignment”

“We need to clean up some of the stuff we are struggling with early in the season, we don’t have long but we clean them up and we will have a nice team.”

The Hayesville Yellow Jackets will next play on Friday hosting the Andrews Wildcats. To get updates or see how the Yellow Jackets have done tune in to all the latest coverage FYN sports on Facebook, Twitter, Instagram and at https://claync.fetchyournews.com/category/teamfynsports