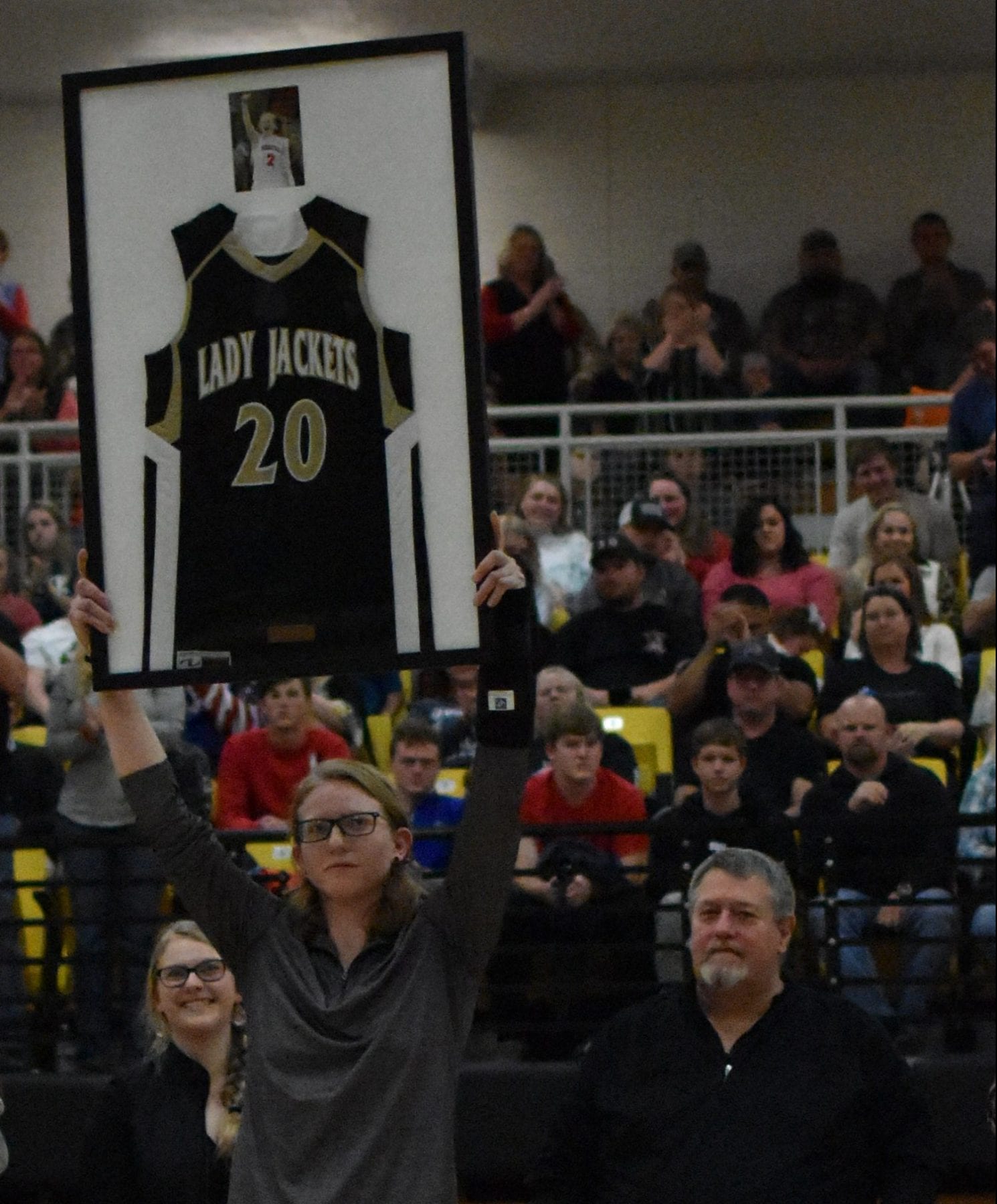 On Friday night January the 10th former Hayesville Lady Yellow Jacket Amanda Thompson had her jersey retired. To say Thompson had a noteworthy career would minimized all that she truly accomplished. Not only did Thompson have a storied career at Hayesville, she went on to possibly have an even better one in college.

It is difficult to describe the challenges she overcame to accomplish all that she did. She went from a small 1a North Carolina high school to playing at the highest level in college. Not only was she on the team she was a star, starting all but one game in her college career. You may ask what was the one game she did not start. Her junior year she told her coach to let a senior start in her place on senior night. That describes the type of person she was/is, selfless and team first always. She was a four year captain while at Mercer as well, very few if ever get chosen to be a captain as a freshman but that speaks to her leadership ability.

One could write 20,000 words on the type of person and player Amanda Thompson was in her career. Rather though were going to share an exclusive interview with her as well as her former high school coach and included a list of her most notable accomplishments in college and high school.

Q: What is your fondest memory of playing basketball at Hayesville?

A: My junior year when we made it to the final four in Greensboro it snowed. We got to stay a couple extra days because of the snow. Each morning my roommates Rachel Benson, Stephanie Patton and I solved the newspaper crossword. We beat Cherokee in the elite eight but lost to Bishop McGuiness in the semifinals. That whole trip with the team and everybody was so much fun.

Q: What do you miss the most about playing for Hayesville?

A: The community but now it’s nice because I don’t have to miss it, I get to be back in it, with teaching and getting to help with the team. At Mercer I had it there but it was just different. It was not as homey as being at Hayesville, just the community, how much everybody is behind our team and players.

Q: Do you still keep in touch with any of your teammates?

A: Yes, especially now that I am at home I get to see many of them.

Q: How big of a difference was playing at Mercer vs. playing at Hayesville?

A: I know I talked about the community of playing at Hayesville, I think Mercer had a similar community because of the small school environment so that was awesome. Obviously though playing in college it’s just a higher level, a faster pace and more intense. Yet there is something about playing high school basketball that’s so much fun.

Q: I know you talked about it a little. Do you plan to stay in coaching, in basketball in general, did you have any professional opportunities?

A: If I had wanted to play professionally I could have gone overseas but it wasn’t what I was interested in. I planned on pursuing an engineering career but God had other plans for me, which I am very thankful for. I have taken a teaching job at Hayesville and I am loving it.

Q:High school and college what was your biggest accomplishment?

A:Team accomplishment In high school it was obviously the final four year that was awesome. Individually it was reaching the 1000 rebound mark. As a team it would be going undefeated two years straight in conference. Again individual accomplishment in college it would have to be a toss up between 1st team Academic all american and SOCON female athlete of the year.

Q: At Hayesville what is the baseline/criteria to have your jersey number retired?

A: Normal Criteria is 1st of all have the statistical side and wait until a time period of at least 5 years.  A coach has to make a nomination then meet with a selected committee to discuss the athlete. Along with the athletic side, the former student-athlete also has to have great character and be a good role model.

Q: Is this your first former player to get their jersey retired? If so what does that mean to you as a coach?

A: This is the 1st player I have coached to have this honor.   I feel very blessed and honored to be a part of her story. She is the one that put all the work and time in.  I am so happy for her.

Q: What was it like to coach Amanda Thompson/how was she different from your typical player?

A: Amanda was one of a kind.  Her Basketball IQ and work ethic were incredible.  She was a coach on the floor and made everyone around her better.  She modeled the qualities of what you look for in a leader. She walked the walk on and off the floor.  She handled adversity in high school that some never face. She watched her mom battle cancer throughout her high school career.  She never missed a practice, open gym, shootaround, walkthrough, meeting, etc. To see what she accomplished, and knowing what she had to go through speaks volumes about her and her parents.

Q: What is one or two moments/games that you specifically remember about her career?

A: There are many moments I remember about Amanda but one specifically was during the SMC Tournament Championship game at Swain.  We were playing Cherokee. Amanda got a Defensive Rebound, pushed the ball in transition to the top of the key and made a behind the back pass to a teammate in the corner for a 3.  She didn’t normally do all the flashy things like that. She was a workhorse but that moment was one of those moments that everyone in the gym went WOAH! She had many moments where she shined on and off the court.

Q: What is it like to have Amanda Thompson back on the bench with you helping your current team some this year?

A: It is truly amazing to have her back helping.  She has a way to make everyone around her better in everything she does.  She represents everything I am trying to promote in our program. She is real and loves people genuinely.  God is definitely at work in her life

Q: Anything else you would like to say about Amanda Thompson or her career as a Yellow Jacket?

A: Amanda is a strong, kind, Christian person with a servant’s heart.  As a Coach, you try to teach your players that there is more to learn than wins and losses.  I hope I was able to teach Amanda half as much as she taught me. Amanda is a winner and I thank God for allowing Amanda to be a part of my family and profession.  If I had a daughter, I would want her to be like Amanda.

It was a special night and one that was beyond deserved. There are very few players like Thompson that come along in sports. Especially in a small town like Hayesville. One might say because of the small town she grew up in though that it helped her be the student, high character individual and overall great person she is.

Individually, Amanda accumulated many great stats and awards including: