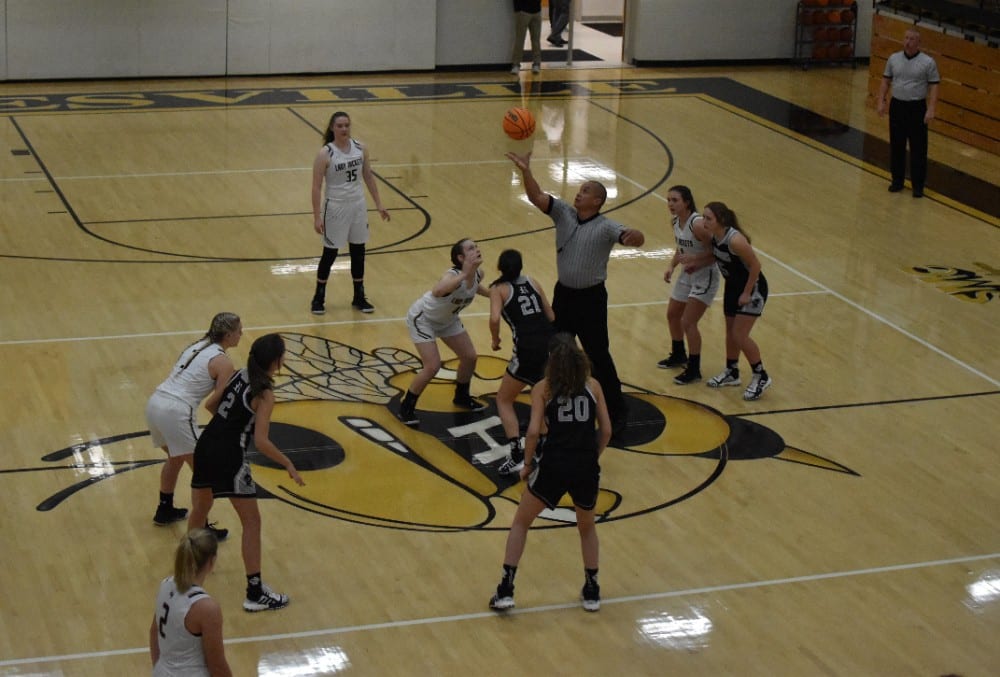 On Friday, December 20th the Robbinsville Lady Black Knights (2-0, 0-0) traveled to Clay county to take on the host school the Hayesville Lady Yellow Jackets (3-2, 2-1). The Lady Knights had yet to really get into their schedule due to the school’s football team having an extended playoff run. This was their first conference game and they had beaten a larger classification Smoky Mountain team the previous night. While the Hayesville Lady Yellow Jackets had taken their worst loss of the season the previous night to rival Murphy. 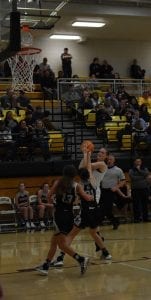 All things seemed to be lining up for Robbinsville to be the favorite in the game. The Lady Yellow Jackets had other plans in mind though and came out in a strong fashion. Head coach Chad McClure had his team ready to play and it showed in their offensive schemes.

Everytime Robbinsville made a defensive adjustment the Lady Jacket would counter punch with some great in game adjustments to keep their offense going. The first quarter got out to a good start with the lady Jackets taking the early lead. The quarter ended with the Jackets up by four 11-7.

The second quarter though the Lady Knights fought back to bring the score within one. With the Jackets in the bonus sophomore Lila Payne got fouled. She knocked down both of her one and one opportunities to take the Jackets lead back to up three. Yet Robbinsville scored the last basket of the quarter to bring the lead back down to Hayesville 20 Robbinsville 19 going into the half. 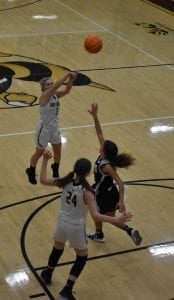 The Jackets were not done yet though they came storming back thanks to some great defense. That along with a few great plays by Junior Brianna Foster gave the Jackets the lead back. First with 5:40 left in the game Foster finished through a foul and hit the free throw for an old fashioned three point play. This brought the score with one, Robbinsville still leading 42-21. Next came a big offensive rebound by Foster and put back with 1:23 left to give the Jackets the lead back.

Yet in the waning moments of the game, the Jackets thinking they had won it Robbinsville had one last big play left in them. Freshman Desta Trammell knocked down a huge three with five seconds left. This tied the game and sent an already great matchup in overtime.

Many times you see the team that hits a big shot to send it into overtime come out and carry their moment into the extra period. This was not the case as overtime was dominated by the Lady Yellow Jackets. They outscored Robbinsville 14-8 in the overtime period to take a 66-60 win. 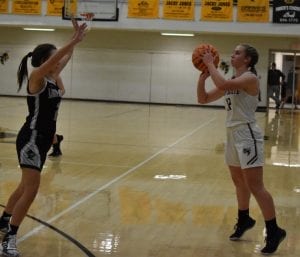 The Jackets were led tonight in scoring by sophomore Lila Payne who contributed a huge 16 points for her team. Also in double digits was senior Jade Patterson with 12, Junior Brianna Foster with 11 and junior Lizzy Brusini with 11 including three three pointers.