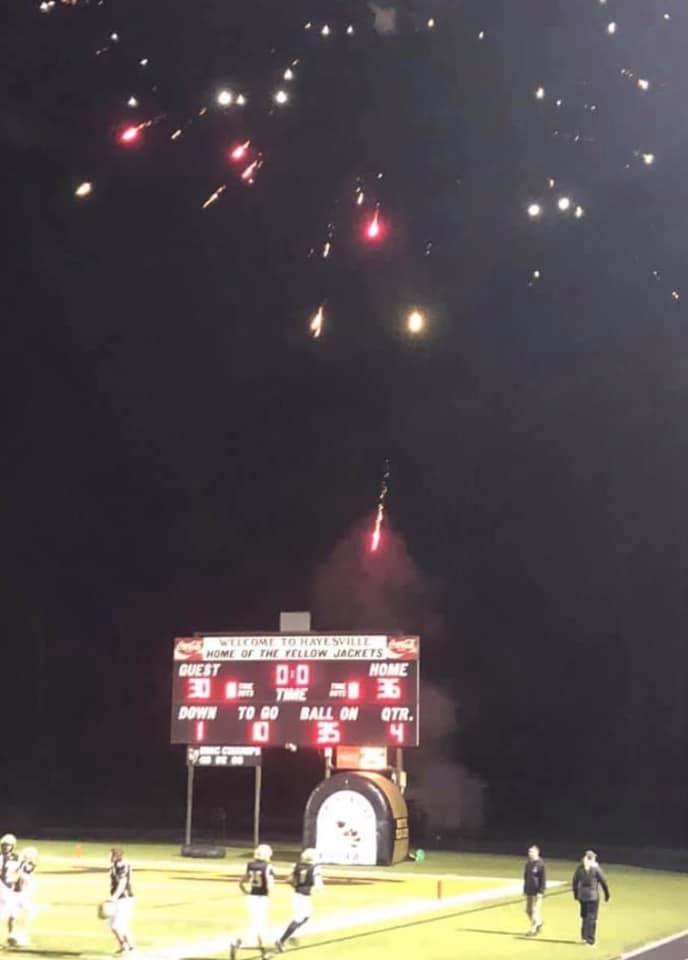 The Hayesville Yellow Jackets hosted the Cherokee Braves on Friday night, the last regular-season home game of the year for Hayesville. It was senior night in Hayesville and while the season has not gone as planned. Hayesville really wanted to pull off the upset and give the seniors a big win their last time playing at Frank R Long stadium. The Yellow Jackets did just that pulling off a massive upset in a game that is an instant classic winning 36-30.

Hayesville won the toss and deferred to the second half, meaning Cherokee would get the ball first on offense. Hayesville’s defense was doing a great job not giving up much, but penalties on the Yellow Jackets aided the Brave’s drive. Two personal foul penalties put Cherokee in a great position and they scored first to take an 8-0 lead. Hayesville looked to respond quickly and were moving the ball well. Unfortunately, Logan Caldwell threw an interception in the endzone to give Cherokee the ball back. Cherokee looked to be on another scoring drive as they crossed into Hayesville territory. The Hayesville defense would step up though and force a turnover on downs to get the ball back.

Hayesville would start the quarter and drive down deep in Cherokee territory. A fourth-down penalty put them in a tough fourth and seven to go. Not only would Hayesville convert the fourth down, but they would also score. Caldwell scrambled to the right to give himself more time and Kyle Lunsford got open in the back of the endzone. Caldwell threw a good ball and Lunsford pulled it down in traffic to get the score.  Once again Cherokee would drive into Hayesville territory but the Yellow Jackets would get a fourth-down stop. Then the Yellow Jackets would respond with a huge scoring drive to end the half to take a 15-8 lead going into halftime.

Hayesville would receive to start the second half and have a perfect start to the third quarter. A long five and half minute scoring drive was finished off by a Jake Mctaggart running score. Cherokee would respond quickly though, scoring after getting the ball in about a minute. Then Braves would intercept a pass and almost run it back for a score. They would score though on offense on their first play of the drive and get the two-point conversion. Hayesville would fumble on the ensuing kick return and give it back to the Braves. For the third time in the quarter, the Braves would score quickly. In less than five minutes of game time, it went from Hayesville leading 22-8 to Cherokee leading 30-22.

Hayesville would have the ball at the start of the fourth quarter down a score, trying to find a way back into the game. The Yellow Jackets would come up a yard short though trying to convert on fourth down and give the ball back to Cherokee. The Braves looked like they were going to score to ice the game as they got inside the 10-yard line. Jake McTaggart would come up with a huge forced fumble recovered by Lane O’Dell in the endzone. Hayesville’s offense would get hamstrung by penalties again giving the Braves the ball back. Hayesville’s defense would find a way to stop Cherokee once again to give the Hayesville offense one last chance. An incredible 80-yard drive would give Hayesville the score they needed with 1:30 left to play. Yet the Yellow Jackets would miss the two-point conversion and found themselves trailing 30-28. With no timeouts, they would have to kick an onside kick. Isaac Chandler kicked a perfect onside kick, as it crossed the ten-yard mark Jake Mctaggart tipped it. Out of nowhere Michael Mauney’s pink gloves could be seen snagging the ball above a crowd of players. After the refs sorted everything out, sure enough, Mauney the smallest player on the field and just a freshman came running out of the pile with the ball. Hayesville would take their golden opportunity and make several big plays downfield. Hayesville was aided by several penalties on Cherokee. The drive was finished off on a Jake Mctaggart quarterback sneak to give the Yellow Jackets the lead. Cherokee got the ball back with about fifteen seconds left and took one last deep shot. It was tipped around and Taylor McClure made an incredible diving interception to seal the Hayesville victory 36-30.

Watch a Full Replay of the Game Here:

Hayesville plays their last regular-season game of the year this upcoming Friday night. The Yellow Jackets will travel to take on the Robbinsville Black Knights. To get updates or see how the Yellow Jackets have done tune in to all the latest FYN sports coverage on Facebook, Twitter, Instagram, and at https://claync.fetchyournews.com/category/teamfynsports