The Hayesville Yellow Jackets opened their brand new state-of-the-art stadium on Thursday afternoon. Hayesville had a nice pregame ceremony to commemorate the special day. Once the first game started though it was all business from the #1 state-ranked Yellow Jackets. Double Headers are played as 5 inning games, and Hayesville made quick work of the visiting Braves in both games. Hayesville won the first game 8-0 and the second game 9-0 to stay undefeated on the season. 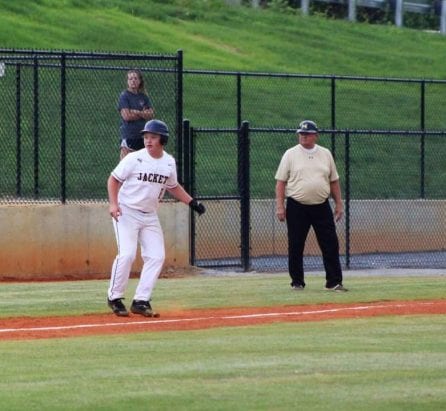 Wayne Barter takes his lead off third base.

In-game one of the doubleheaders, Jeremy Stewart got the start on the mound and delivered on his all-time best performances. He was one pitch away from throwing a perfect game, hitting a batter in the fourth inning. That would be the only base runner the entire game though for Cherokee. He completed the game in the bottom of the fifth inning with a strikeout though to complete a no-hitter.

Offensively the Yellow Jackets were strong in game one and probably would have scored a few more runs. Yet several times throughout the game hard-hit ball was hit right to a Braves defender for an out. In the second inning, we saw a Hayesville have back-to-back triples from Connor Bradley and Avery Leatherwood. Cade Denton was the only Yellow Jacket with two hits in game one, also driving in multiple runs. Overall it was unimportant as Hayesville would have only needed one run in the game. As Jeremy Stewart pitched a dominating performance that completely stifled the Braves. 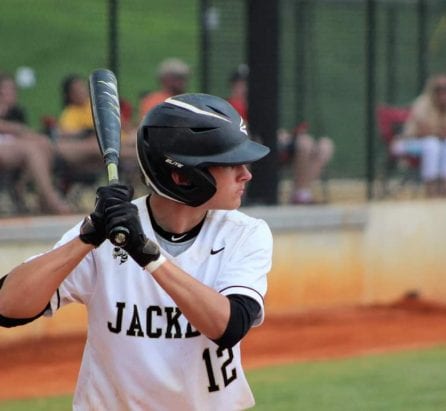 Avery Leatherwood locked in before he hits his triple.

In-game two Hayesville would bat first playing as the away team in the second game of the doubleheader. Hayesville got off to a fast start as Bradley and Leatherwood both got on. Then before ever taking the mound as the starting pitcher Clayton Vandiver Helped himself out big time with a 2RBI triple. This would be the first of two triple in the game for Vandiver who had a big game for Hayesville. Eli Roberts, Avery Leatherwood, and Jeremy Stewart would all have multi-hit games en route to Hayesville scoring 11 runs in game 2.

As previously said, Clayton Vandiver was the starting pitcher in game two and turned in another great performance. After a shaky first inning with two hit batters, Vandiver would settle in to pitch a great game for Hayesville. He ended the first inning with a strikeout to get out of the jam, then would go on to get the next six Cherokee batters in a row out. He was one play away from matching Jeremy Stewart with a no-hitter of his own. With two outs in the last inning, an error led to the next batter get a base hit. As is though it was great performance overall and a great way to end the grand opening of Hayesville’s field with two wins on the day.

Hayesville will next play on Tuesday, June 1st hosting the Swain Maroon Devils. To get updates or see how the Yellow Jackets have done tune in to all the latest FYN sports coverage on Facebook, Twitter, Instagram, and at https://claync.fetchyournews.com/category/teamfynsports