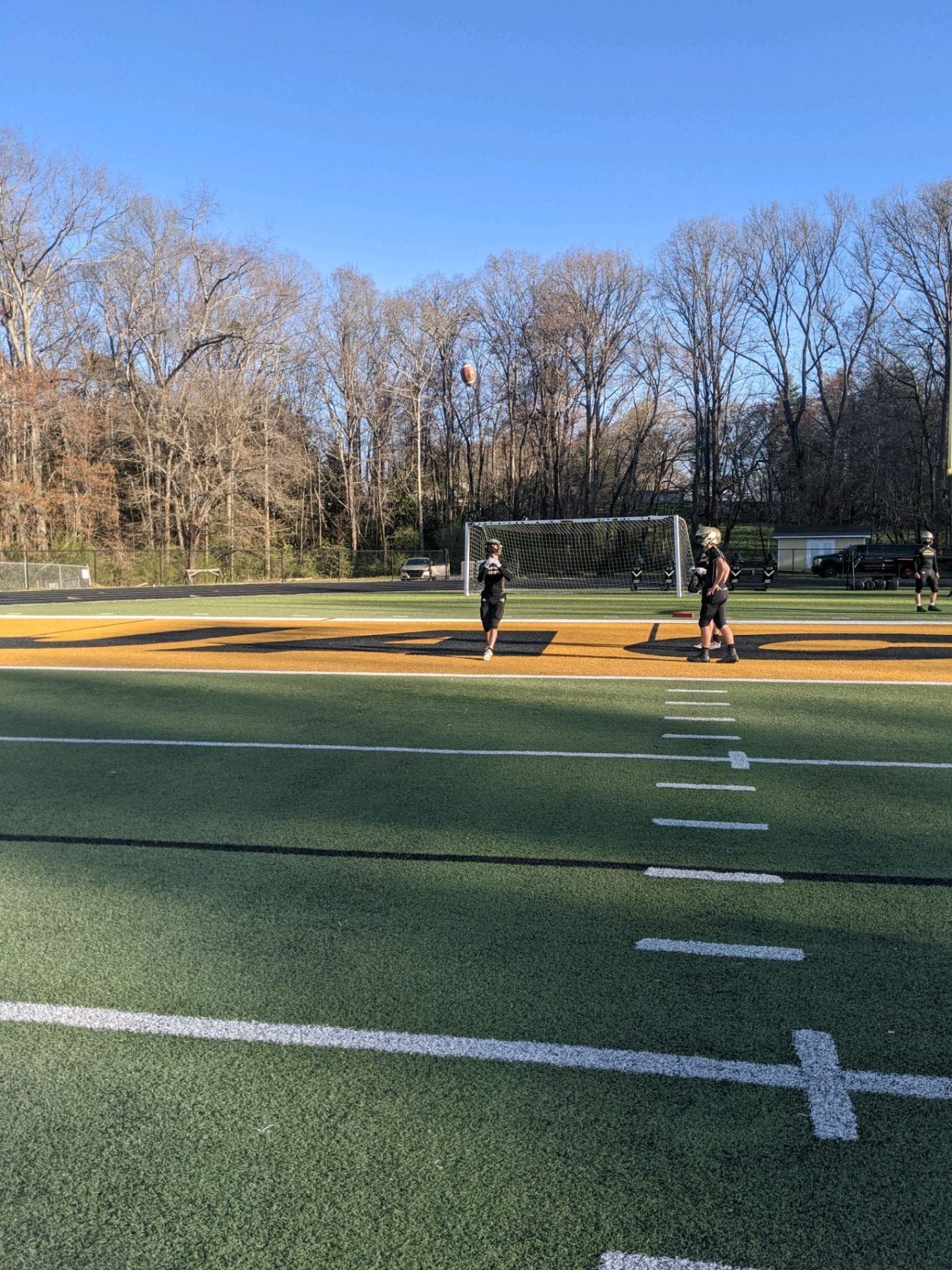 The Hayesville Yellow Jackets hosted the Rosman Tigers on senior night Friday night. Hayesville still looking for their first win on the season playing their best game to date. Winning the turnover margin in the game and coming up with some big plays offensively allowed Hayesville to get their first win of the season. The 32-14 victory saw Hayesville finally put together a full four quarters.

The Yellow Jackets kicked off and shocked Rosman with a surprise onside recovering it in Tiger territory. On the first play from scrimmage, Senior Blake McClure took a pitch to the left and outran all the defenders for a 48-yard touchdown run. After the exciting start, Hayesville and Rosman swapped the ball back and forth several times. Neither offense could get much going. The first quarter ended with Hayesville holding their 7-0 lead after their early score.

In the second quarter, Hayesville’s offense was a little sloppy with multiple fumbles but each of them were able to be recovered by the Yellow Jackets. The offense was jump-started though, by a big interception by freshman Isaac Chandler. After a good drive into the red zone, Logan Caldwell threw a strike to Tyler Anderson for a 12-yard passing touchdown. Hayesville did miss the extra point though making the lead 13-0. As well that’s the score we had going into halftime.

To start the second half Rosman made a big play forcing and recovering a fumble as they were trying to get back into the game. Yet Hayesville got the ball back quickly after forcing and recovering a fumble just three plays into Rosmans drive. Yet on the ensuing offensive drive, Hayesville turned the ball over on downs giving it back to Rosman. Rosman had their best drive of the night to this point finally getting into the endzone making the game 13-8 Hayesville still leading.  Hayesville answered right back though driving down the field getting it inside the five. Ethan Taylor playing fullback in a new wishbone set from Hayesville pounded it into the endzone on a trap play to make the score 19-8. After forcing another turnover the Yellow Jackets quickly drove back down the field. Finishing off the drive with a Logan Caldwell 6 yard touchdown scramble. This made the score 25-8 and that would be the score to end the quarter as well.

Rosman got the first score of the Quarter to cut the lead 25-14. Yet once again Hayesville answered quickly with a long touchdown score by Kyle Lunsford after a good scramble and throw by Caldwell. This score put the game out of reach for Rosman with the time waning in the fourth quarter. The Yellow Jackets were able to get several reserves in the game to close the 4th quarter. Rosman came close but never got into the endzone again with game-ending Hayesville winning 32-14.

Q: Think we can all agree, a little bit of a disappointing season so far but came away with your first win of the year tonight on senior night what are your thoughts?

A: We told the kids this season didn’t start the way we wanted to but that’s in the past. I am just super proud of our kids and the coaches, you know they kept working hard through adversity. Lifes not easy, football is not easy, you know the kids have had a great attitude, worked hard, and found a way to finish tonight.

Q: What does it say about the character of this team, especially this senior class who had some big performances tonight, even though we know playoffs are out of reach for this team?

A: We asked the seniors to give us more and challenged the underclassmen to play hard for these 7 seniors as their games are running out. I think they did that tonight, we have seen them go through so many tough losses and they really relished the moment. You could feel the excitement in the locker room after the win and it’s great to see these seniors win their last game at home.

Q: It seemed like tonight through the effort of your players you came up with a lot of the 50/50 situations and loose balls. Avery Leatherwood recovered multiple onside kicks, as a team you forced and recovered multiple fumbles. Yall have forced and recovered a lot of fumbles this year, is that something you teach or focus on?
A: We haven’t been on the positive side of the turnover margin this year, we were tonight and that was big. Give credit to our defensive coordinator Jonathan Hensley who teaches 11 hats to the ball and finishing plays. We got a few bounces our way tonight and capitalized.

Q: You play at Swain next week, the last game of the season, while you’re not playing for playoffs, you are playing for offseason momentum. What’s the goal and what are yall looking to do going into your last game?

A: We want to finish this season well. We would like to finish on a two-game win streak. It has been awhile since we have won over they have some really good kids and are going to play hard. They want to finish on a win as well. We see these young kids for us growing making a lot of plays. You saw Isaac Chandler have a big interception tonight, at a critical point in the game. If we can go over there and get a win that will propel us into next season.