The Hayesville Yellow Jackets hosted the defending state champions, the Robbinsville Black Knights last night for their homecoming game. The Yellow Jackets got off to a great start in the game and actually took an early lead. The Black Knights offensive and defensive lines were just too dominating in the game though. They had taken control by the second quarter and wouldn’t look back. Hayesville gave them a much better game than expected, ultimately though Robbinsville won 38-14.

The game got off to a perfect start with Hayesville successfully attempting a surprise onside kick. Starting with the ball on Robbinsville’s 44-yard line Hayesville threw a running back pass for a 30-yard completion. Then after a couple of unsuccessful plays, Hayesville was backed up to a fourth and 24 to go. Quarterback Logan Caldwell threw and a perfect pass to Senior Blake McClure for a touchdown. Hayesville’s extra point was good and had taken an early 7-0 lead. 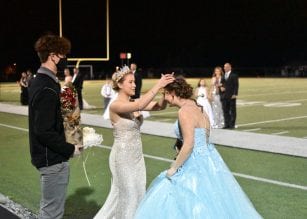 The second half was littered with flags and some sloppy play by both teams. The deciding factor in the game though was Robbinsville’s dominant line play on both sides of the ball. Robbinsville had two-star freshmen leading the way for them on offense with big rushing nights for each of them. Robbinsville had three second-half touchdowns to just one for Hayesville. The Yellow Jackets struggled with turnovers with a fumble taken back for a touchdown and several interceptions on the night. The Yellow Jackets ultimately fell on homecoming 38-14.

Hayesville was able to uphold their tradition of having homecoming court members be escorted by there-fathers and have a child attendant.

Q: Got off to a great tonight really surprised Robbinsville tell me how proud of your team’s effort tonight?

A: They played hard, much better tonight. Had some early success tonight got the onside kick, went down, and scored. I told them if you will fight and play hard good things will happen.

Q: You improved a ton from game 1 to game 2, night and day, you have a full week of practice coming up before a big rivalry game against Murphy what do you guys need to focus on this week?

A: We’re going to come in tomorrow to watch the film make sure everyone is healing up. We’re in a tough stretch right now three games in 12 days. We did improve in the short amount of time we had and were going to continue to get better. We need to cut down on the turnovers, I feel like tonight we did a better job of getting some first downs against a really good team.

Q: What do you think you guys need to do if your focusing on one or two areas to come out and give Murphy a good game, maybe surprise some people and even beat them?

A: Murphy is a really good team as well. We need to execute, move the sticks, do a better job of sustaining drives. Our defense has played well at times but we need to limit the big plays. I think tonight we grew up a lot from Monday especially the young kids, you can see the improvement and the confidence.

Hayesville will next play on Friday, March 12th host their rival the Murphy Bulldogs. Remember all Hayesville home football games this season will be broadcast live on fyntv.net as well as on the fyntv app, available on all major app stores for any of your smart devices. To get updates or see how the Yellow Jackets have done tune in to all the latest FYN sports coverage on Facebook, Twitter, Instagram, and at https://claync.fetchyournews.com/category/teamfynsports