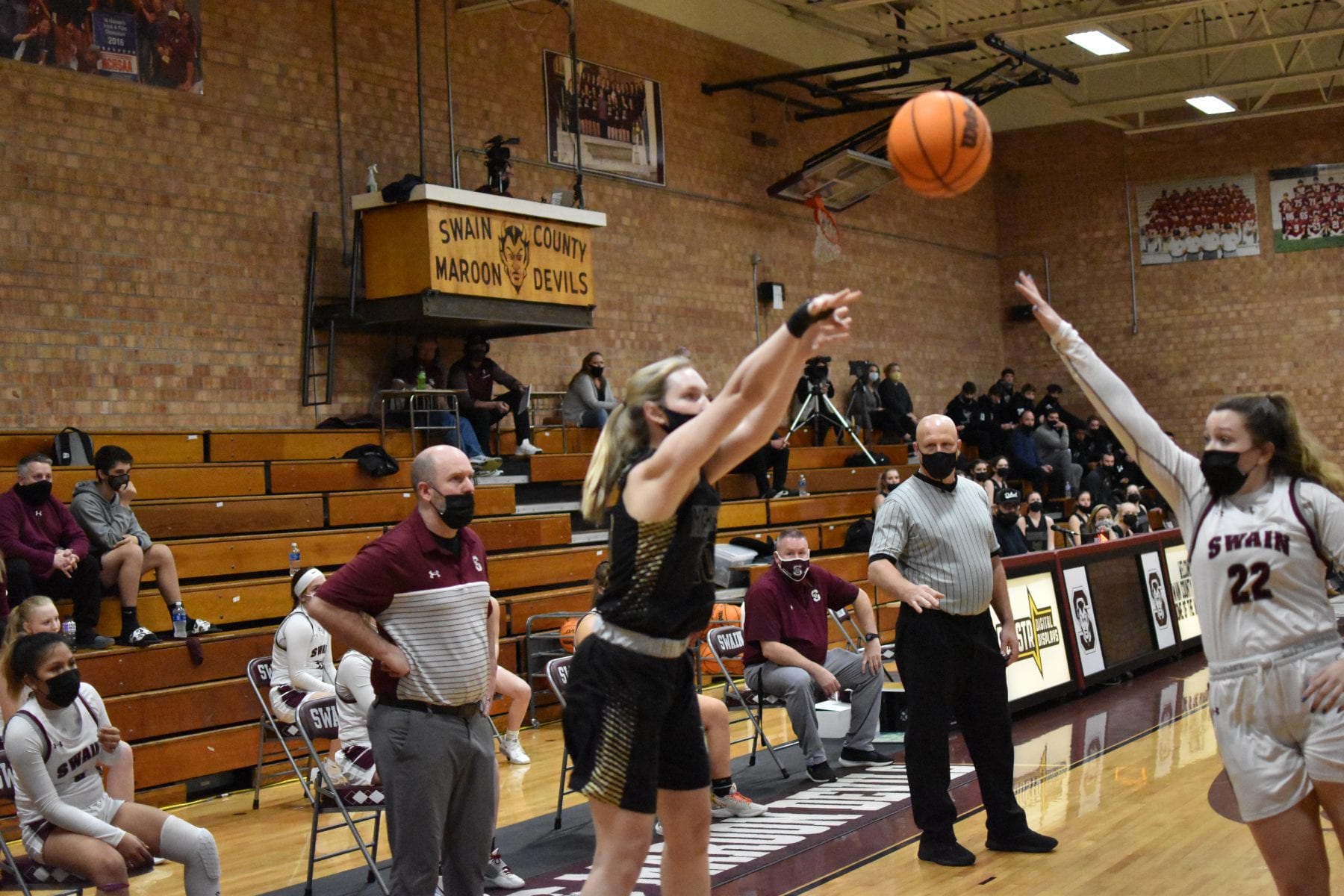 The Hayesville Lady Yellow Jackets played at the Swain Lady Devils in their last game of the season on Thursday evening. Hayesville and Swain, both likely already out of playoff contention, did not play like two teams whose seasons were coming to an end. Both teams played hard for four full quarters. The game came down to the wire with Hayesvlle almost pulling off the comeback win. Yet they came up short on the last possession losing 51-53.

Brianna Foster rises up to hit a tough shot.

In the first quarter Hayesville got out to a quick lead, thanks to three first quarter three pointers. Yet Swain battled back late in the quarter and hit some big shots of their own. Both teams were executing well on offense but the Lady Devils struck the last blow in the quarter. This allowed them to take a 16 to 13 lead into the second quarter.

The second quarter saw each team ratchet up the defense and buckets were not coming easily for either team. Hayesville offense was only salvaged in the quarter thanks to two big threes from Lizzy Brusini. While Swain was led by Savannah Smith who had seven of her teams nine third quarter points. Hayesville was able to edge Swain by one point in the quarter cutting the lead to 23-25 going into halftime.

In the third quarter the Hayesville offense really faltered only managing seven third quarter points. This allowed Swain to increase their lead and take the momentum. It was Swains senior night and they were playing with great energy. With some strong inside play Swain outscored Hayesville by four points in the quarter. They carried a 36-30 lead and the momentum going into the fourth quarter.

It appeared the Lady Devils may cruise to victory going into the fourth quarter. Yet Hayesville had one last run in them looking to steal a victory away after trailing for the majority of the game. Behind a big quarter from Brianna Foster who had 10 fourth quarter points Hayesville brought the game all the way back even. Yet they couldn’t finish it off losing in the final moments of the game 53-51.

One has to wonder if this was a regular season with 20 plus games what this Hayesville girls team would have become. It seems this team is just starting to play their best basketball of the season, only to have their season end.