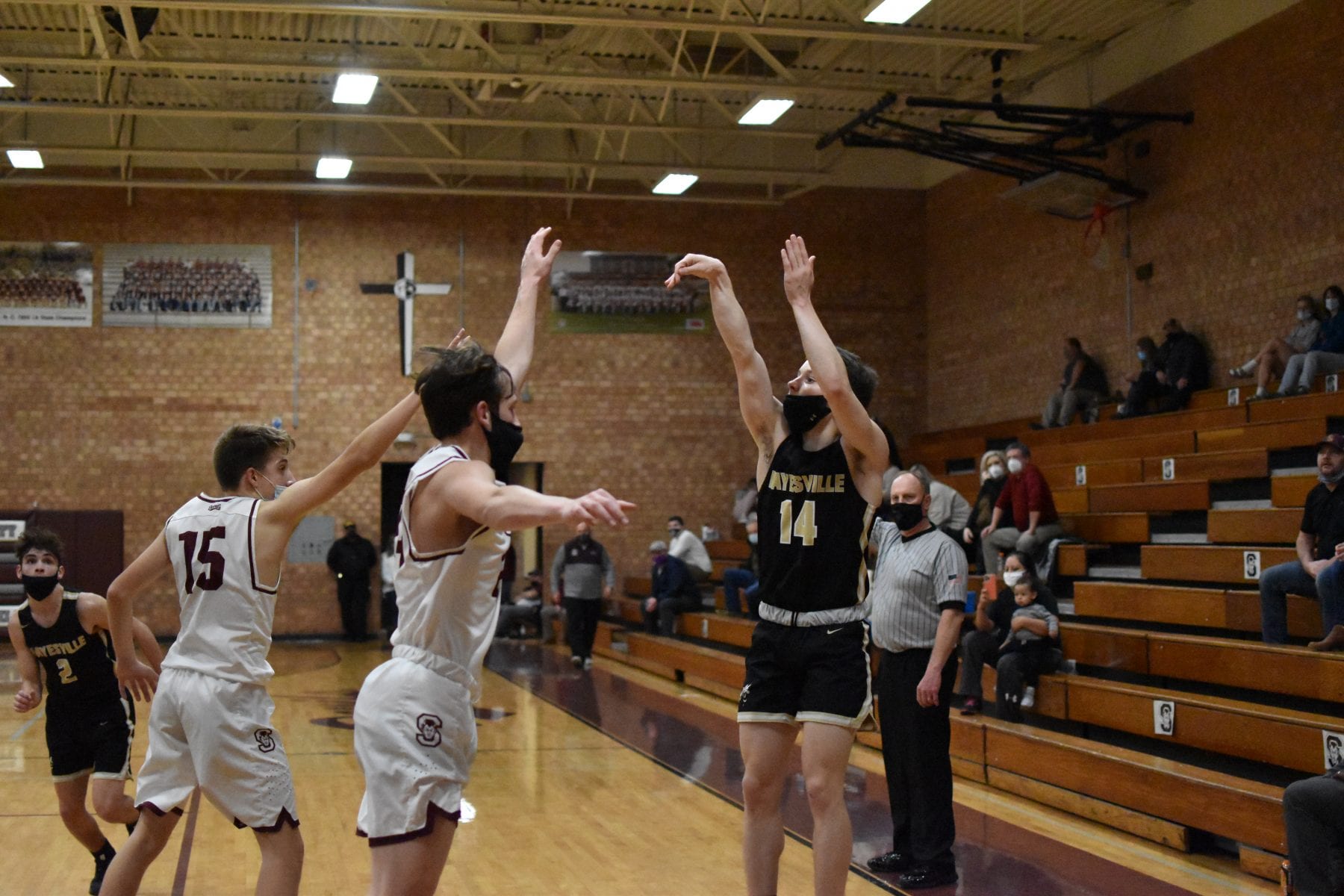 The Hayesville Yellow Jackets played the Swain Maroon Devils in Bryson city Thursday night. The Yellow Jackets were chasing history looking to become only the second team in Hayesville history to play a regular season undefeated. It looked like Hayesville would fall short of this goal entering the fourth quarter down 55-42. Yet playing the best quarter they had played all season, led by star guard Kolbe Ashe, Hayesville stole a victory from the clutches of defeat. They outscored Swain by 22 points in the fourth quarter winning 71-62.

In the first quarter Hayesville and Swain traded blows early with Swain landing the last few punches in the quarter. Hayesville did not seem quite in sync and were having some turnover troubles that would plague them for the first three quarters of the game. They did get some good finishes from their forward duo. With both Brady Shook and Kyle Lunsford chipping in four first quarter points each. Yet Swain got scoring from four different players and edged Hayesville in the quarter 17-13.

The second quarter once again saw the teams seemingly play pretty evenly, that is until Hayesville found themselves in foul trouble. Starters Brady Shook and Kolbe Ashe finished the quarter on the bench as they had two fouls each. Swain took advantage of a rare occasion for Hayesville, that is having Kolbe Ashe on the bench. Swain played a full court press defense and forced multiple Hayesville turnovers. This allowed them to extend their lead going into halftime to 33-28.

The third quarter saw Swain come out as hot and put Hayesville in an unfamiliar position. That is being down double digits, something that has happened very few times, if any this season. The Yellow Jackets were up against it and appeared to be on their way to their first loss of the season. That is until Kolbe Ashe and company seemingly flipped the switch, starting to finally fight back. It looked like it might be too late though as Swain took a 55-42 lead into the fourth quarter.

After a quick opening bucket by the Devils, the Yellow Jackets found themselves down 15 points looking for answers. From that point forward though it was all Hayesville and they were chipping away at the lead possession by possession. Led by Ashe who had ten fourth quarter points, Hayesville all of sudden found themselves in a dogfight. Swain fighting for a chance at a playoff berth and Hayesville fighting for a chance at history.

Hayesville hit five three pointers in the fourth quarter, each feeling more important than the previous one. The last of those five threes put them up by three with under two minutes left in the game. After regaining possession Swain had no choice but to foul with the game on the line. Swain waited to foul until the ball was in the hands of freshman Asher Brown. Brown calmly went to the free throw line and nailed two free throws, only to do the exact same thing on the next possession. After the four biggest free throws of Brown’s young career, the Yellow Jackets had a seven point lead with only seconds left.

Hayesville not only finished the game off winning 71-62 but made history completing an undefeated regular season. It was a very cool moment for myself as a media member. Having played myself on Hayesvilles last regular season undefeated team (2011-2012), now getting to cover the second team in school history to do it. Both teams being very similar, undersized but scrappy, great defensively and playing great unselfish team ball. With each team having a bona fide star guard leading the way. The question remains though, can this Hayesville team do what the first undefeated regular season team could not? That is to win a North Carolina 1A state championship.

Playoff brackets will come out on Sunday afternoon and Hayesville will find out their seeding for playoffs as well as their first round opponent. FYN will have all that coverage as the state releases the information. As well FYN will also be providing playoff game previews for each round of the playoffs.  So make sure to tune in to all the latest coverage from FYN sports on Facebook, Twitter, Instagram and at https://claync.fetchyournews.com/category/teamfynsports.