HAYESVILLE, NC – The rich history of the Cherokee Indian tribe was featured during the 8th annual Cherokee Heritage Festival Saturday, Sept. 21, in downtown Hayesville. Visitors flocked to the event to learn about the Native American culture, dating back to 11,ooo years of old. Guests enjoyed activities such as storytelling, native plant nature walks, Cherokee frybread cuisine, and witnessed members of the native tribe creating baskets, jewelry, and other skilled crafts. Numerous items were on display, including traditional tools and weaponry pieces. Unique, handcrafted wares were available for purchase. 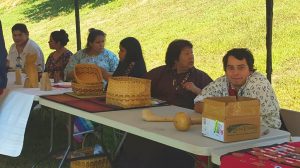 Members of the eastern Band of Cherokee Indians demonstrated the workings of their crafts at the Cherokee Heritage Festival.

The Old Clay County Jail was open for public tours during the festival, with a silent art auction taking place on the musuem grounds. The jail museum was constructed in 1912, and served as Clay County’s detention center until 1972. The historic site features an impressive collection of artifacts, including a room dedicated to the Native American tribe.

Festival guests were invited to view the Cherokee Homestead Exhibit, located adjacent to the festival. The exhibit features replicas of a traditional winter house, summer house, corn crib, and interpretive art walls. Many visitors chose to stroll through the serene, botanical sanctuary garden nearby, and hike the two-mile Quanassee Path that connects five native heritage sites. 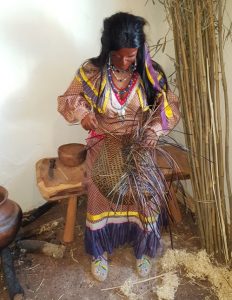 A Cherokee display in the Old Clay County Jail museum.

According to the U.S. Department of the Interior, approximately 200 years ago the Cherokee Indians were one tribe, or “Indian Nation” that lived in the southeast part of what is now the United States. During the 1830s and 1840s, the period covered by the Indian Removal Act, many tribe members were forced west to a territory that is now the State of Oklahoma. A number remained in the southeast and gathered in North Carolina where they purchased land and continued to live. Others went into the Appalachian Mountains to escape being moved west, and many of their descendants still reside in the area.