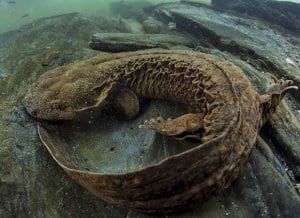 HAYESVILLE, NC – The eastern hellbender is North America’s largest salamander. Living in clean, swift-running rivers throughout the eastern United States, the reptiles spend their entire lives in water. Also known as snot otters and devil dogs, a decline in the hellbender population is causing concern for scientists and wildlife management officials. The U.S. Forest Service is requesting the public’s assistance through its “Don’t Move the Rocks!” campaign. Signs can be found in national forests where hellbenders are known to live and reproduce.

Furthermore, biologists with the N.C. Wildlife Resources Commission (NCWRC) are asking the public, in particular anglers, to report any sightings of hellbenders to the agency. Sightings are an important part of a long-term inventory and monitoring project that agency staff began in 2007. NCWRC hopes to learn more about where hellbenders are located and how the population is coping. 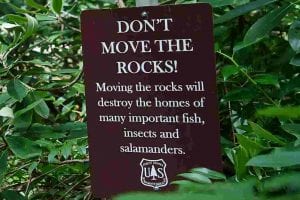 A sign posted by the United States Forest Service.

Hellbenders were once common, but have disappeared throughout much of their habitat, mainly due to declining water quality and environmental degradation, and to a lesser degree, persecution from anglers who mistakenly think that hellbenders decrease trout populations. Although the creatures may occasionally strike a trout on a line or stringer, hellbenders eat mainly crayfish, explained Wildlife Diversity Biologist Lori Williams. Williams has conducted extensive research on hellbenders. “They may also eat unsuspecting minnows and scavenge for dead fish, discarded bait or other dead animals,” Williams said. “However, fish can be bigger predators of young or larval hellbenders than hellbenders of fish.”

Hellbenders are found in fast-moving, clean mountain streams in northern Georgia and western North Carolina. Because they breathe through their skin, hellbenders are sensitive to poor water quality. The reptiles are considered a “bioindicator,” or a species that can tell biologists about degrading environmental conditions when conditions begin changing.

“When Clemson University master’s student Lauren Diaz set out to study the ecology of hellbender salamanders (Cryptobranchus alleganiensis) in the streams of western North Carolina, she anticipated some challenges,” Mary Bates, a freelance journalist with TheScientist.com explained. “Although they can grow to two feet long, hellbenders…are difficult to find in the wild due to effective camouflage and their habit of hiding under rocks. And it’s not unusual for the nest boxes that researchers install as habitat for the amphibians to get washed away or blocked by sediment. But last spring, Diaz made a startling discovery when she went to check on the animals. Although all of the nearly 100 boxes she’d installed several months earlier in the Little Tennessee River watershed were still in place, not one housed a hellbender. Closer investigation revealed the population was gone.

“Hellbenders inhabited these streams as recently as 2015. Nobody knows exactly when they left or why, but Diaz fears they died out. Because hellbenders only live in fast-moving, clean mountain streams, she speculates that changes in land use around the Little Tennessee River might be affecting the water quality, although she hasn’t yet tested that hypothesis.

“This population’s disappearance is just one of the latest blows for the salamanders, whose numbers are believed by researchers to be in decline across their range from New York to Alabama and Mississippi and as far west as Missouri,” Bates wrote. “To the surprise of many biologists and conservationists, however, the US Fish and Wildlife Service in April denied the eastern hellbender federal protection under the Endangered Species Act. The agency cited a paucity of data: there wasn’t enough information available about the past and current status of hellbenders to make an informed assessment.”

Anyone who finds a hellbender is asked to leave it undisturbed. Note the location (physical location or GPS coordinates) and take a photo, if possible. Email information to Lori Williams at lori.williams@ncwildlife.org.

In addition, citizens can call the Commission Wildlife Interaction Helpline at (866) 318-2401 and provide details of the observation.