We’ve been talking about it all summer. I’ve covered more camps than I can count. Young athletes have been out as early as January lifting and preparing for it. Finally on Wednesday I felt it.

Wednesday morning bright and early found me on the football field of Fannin County High School covering the last day of their youth football camp. Now as I said a few sentences earlier I’ve been out all summer covering football camps, but this was the first time it really clicked with me that we are only a few weeks away. And I won’t lie, a lot of it had to do with the weather. 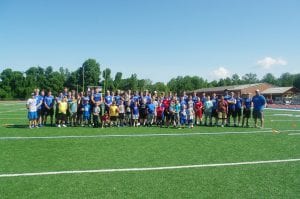 Being at the Fannin County youth camp on Wednesday in some cooler air made me realize just how close we are to football season!

There was a slight breeze and I dare to say chill on Wednesday that I hadn’t felt all summer. Granted it was early in the morning and I’m so used to summer heat that even the slightest temperature drop can make me reach for my jacket. But this time, surrounded by young athletes who are the future of their program, it all started to set in.

It’s hard to imagine Friday Night Lights when it’s 90 degrees in Georgia in the middle of July. When I think of football I think of all the late Friday afternoons when I was in high school and the trees were ablaze with the bright orange and reds of fall. I think of the UGA games I’ve gone to where it’s been so cold part of the reason I was standing was not so much to cheer than to try and keep warm.

I will admit, football season has kind of snuck up on me this year. Earlier in the summer, Team FYN Sports was in baseball mode covering the local youth tournaments. I was in baseball mode keeping up with the Braves. But this is the South, and not just the South but SEC stronghold too. So of course even though baseball comes to the forefront, football stays simmering on the back burner at all times. That’s another reason why when I felt that cooler air on Wednesday, I was so easily able to slip back into football mode.

Local high schools start back as early as the week after next, with scrimmages coming the week after and then regular season the week after that. It’s crazy to think how time flies, and for teams that have been out practicing all summer, they realize that this is where the rubber meets the road.

I remember the first story I did for Team FYN Sports involving football was earlier this summer when Dawson County scrimmaged Pickens in a spring game. It took me a moment to realize when I got to the Dawson County field to realize that were weren’t in August, and this being in May we still had another three full months to go. But you couldn’t have told that to either of the two sides that night. 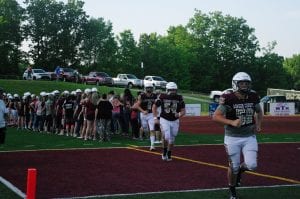 The mommas of the Dawson County Tigers formed a tunnel for the players to run through at their spring game like it was a regular season game.

The Dawson County mommas circled up for pre-game prayer, and lined up to form a tunnel for their sons to run through onto the field. Both home and away stands had a decent amount of fans to fill them. Both schools even brought their marching bands, and Pickens brought their cheerleaders. This energy is what I try to convey to everyone when I say that sports, and especially football, create a community rivaled by few other events.

Each time I’ve gone to a camp, or scrimmage, or even just a practice in this community, I’ve seldom been the only one there who is not a part of the team. Parents will come by to see their sons, or even just community members will drop by to get a look at the team before they run out for the first game. There’s something else special about following a team from the ground up, a season from the beginning to end. I know I’m not the only one that feels that way, and it makes my job all the much more enjoyable.

And they all seem ready. They’ve all been lifting and getting stronger since the beginning of the year. They’ve been out running drills and working for positions since the weather was warm enough. Now they’re breaking out the pads, helmets and fine tuning plays until it’s time for that first kick-off.

Football season is coming, and from the locker room to the press box, I think we’re all ready.