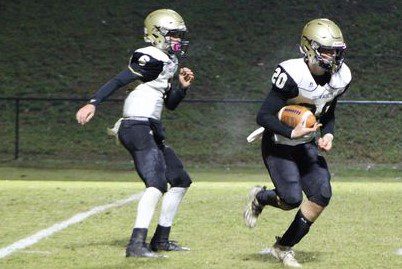 The #19 seed Hayesville Yellow Jackets traveled to the #14 Swain Maroon Devils in the playoffs Friday Night. Hayesville as has been the case with many of their losses this season struggled with turnovers. Hayesville moved the ball effectively most of the night but couldn’t finish off drives. As well several of the turnovers gifted Swain touchdowns making the game out of reach. Ultimately Swain would go to win the playoff game 40-14

1st Half:
Swain would strike first, scoring on the first drive of the game but would miss the extra point making it 6-0. Hayesville would drive inside the Swain 20 before Logan Caldwell threw an interception. Swain’s defensive end faked his rush then backed up a little before jumping and making a great catch. Hayesville would get the ball quickly though, recovering a fumbled Maroon Devil snap. Yet another Hayesville interception this time returned for a touchdown really hurt the Yellow Jackets. After getting the ball back off a punt the Maroon Devils would score again to go up 20-0. Then after their third interception of the half Swain would score again to go into halftime up 27-0.

After trading the ball back and forth a few times Swain would open the second-half scoring. This would increase their lead to 34-0. Hayesville would finally score two drives later to though to get on the board. Swain would answer quickly though increasing their lead back to make the score 40-7. Hayesville would get a great return from Taylor McClure past the 50. Tate Roberts came in at QB and engineered the last drive of the game. He threw a touchdown pass as time expired to Michael Mauney to give Hayesville their last score of the season.

Make sure to keep an eye out this winter as TeamFYNSports is not done doing live video coverage of Hayesville sports. The Yellow Jackets basketball team starts their season with their first game on Nov. 22nd. The game will be the 1st of 10 home games that will be on fyntv.com this basketball season.