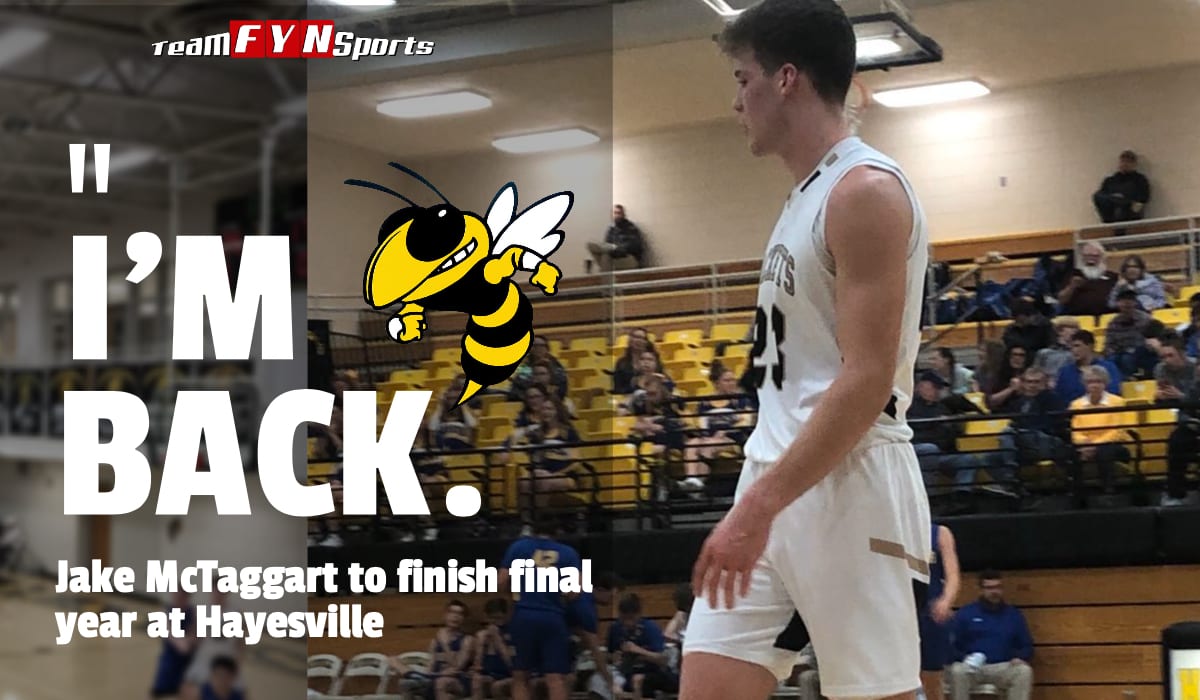 Breaking news Yellow Jacket fan base, Hayesville’s own Jake Mctaggart has officially re-enrolled at Hayesville high school as of today. Mctaggart transferred to Towns County last fall after North Carolina postponed all sports seasons including football and basketball. Hayesville lost many good athletes more so than any other school in the area to surrounding Georgia schools after the NCHSAA’s decision to postpone all sports seasons. It is great to now be able to get at least one of those athletes back.

Mctaggart had garnered several big-time awards during his time as a basketball player at Hayesville. For one he was the SMC conference basketball player of the year his sophomore season. During his sophomore season for Hayesville, he averaged 19 points per game as well as becoming a fan favorite for his many highlight-reel dunks. His junior basketball season at Towns County was one for the history books. He led Towns to their first-ever basketball state championship. He averaged a double-double of 16 points per game and 10 rebounds per game. Even more impressive during the playoffs he averaged 22 points per game and 12 rebounds per game. For anyone that watched the Towns County playoff run it was evident that not only did he raise his level of play but he was Towns County’s go-to guy during the championship run. This was a big reason he was named the FYN Sports Georgia player of the year. Now He comes back to a Hayesville basketball squad that brings back Kolbe Ashe who led the Yellow Jackets to an undefeated season. As well Ashe was named the FYN Sports North Carolina player of the year. With Mctaggart back Hayesville was already the favorite to win the conference in basketball next year now may be the favorite to win state with a duo like Ashe and Mctaggart.

Head basketball coach Michael Cottrell had this to say about Mctaggart’s return.

“I am excited about athletics getting back on track as normal seasons approach in august. Student-athletes are going to have a great experience the rest of this year and getting the sports seasons starting again this summer It’s good to see our student-athletes heading back home after this strange COVID time. I know all of our students are ready to get things back to somewhat normal again.”

In Football Mctaggart has limitless potential but an injury his sophomore year kept him from playing. We know that a full season could be something special from Mctaggart especially when you think that his freshman season at Hayesville on a 1-9 football team he had some solid stats. 32 carries for 172 yards, 5.4 yards per carry, 20 catches for 237 yards 2 TDs, he even threw for 3 TDs. Then because of Covid situations he only played in five football games at Towns County this past year. In only five games though he had 13 catches for 245 yards.

Head football coach Chad McClure had this to say about Mctaggart’s return.

“Jake is a talented athlete. Every player who enters our program can help us continue to build a team that can compete for an SMC championship. As a staff, we will see where he can most effectively help us. We have some great players returning as well, so we are excited about our Fall 2021 team.”

Q: What drove your decision to come back to Hayesville?

A: Hayesville is home and there’s no place like home. That was the deciding factor in my decision. I want to spend my last year with the kids I have grown up with and this community. Hayesville is a very special place to me and I’m excited to be back with my friends and teammates, excited for a big year.

Q: What are your goals in football and basketball for your senior year?

A: Enjoy my senior year and cherish this time with my teammates are my main goals for next year. I’m super excited to be back. I know the sky is the limit for both our football and basketball teams. Just have to work hard and see where this season goes.