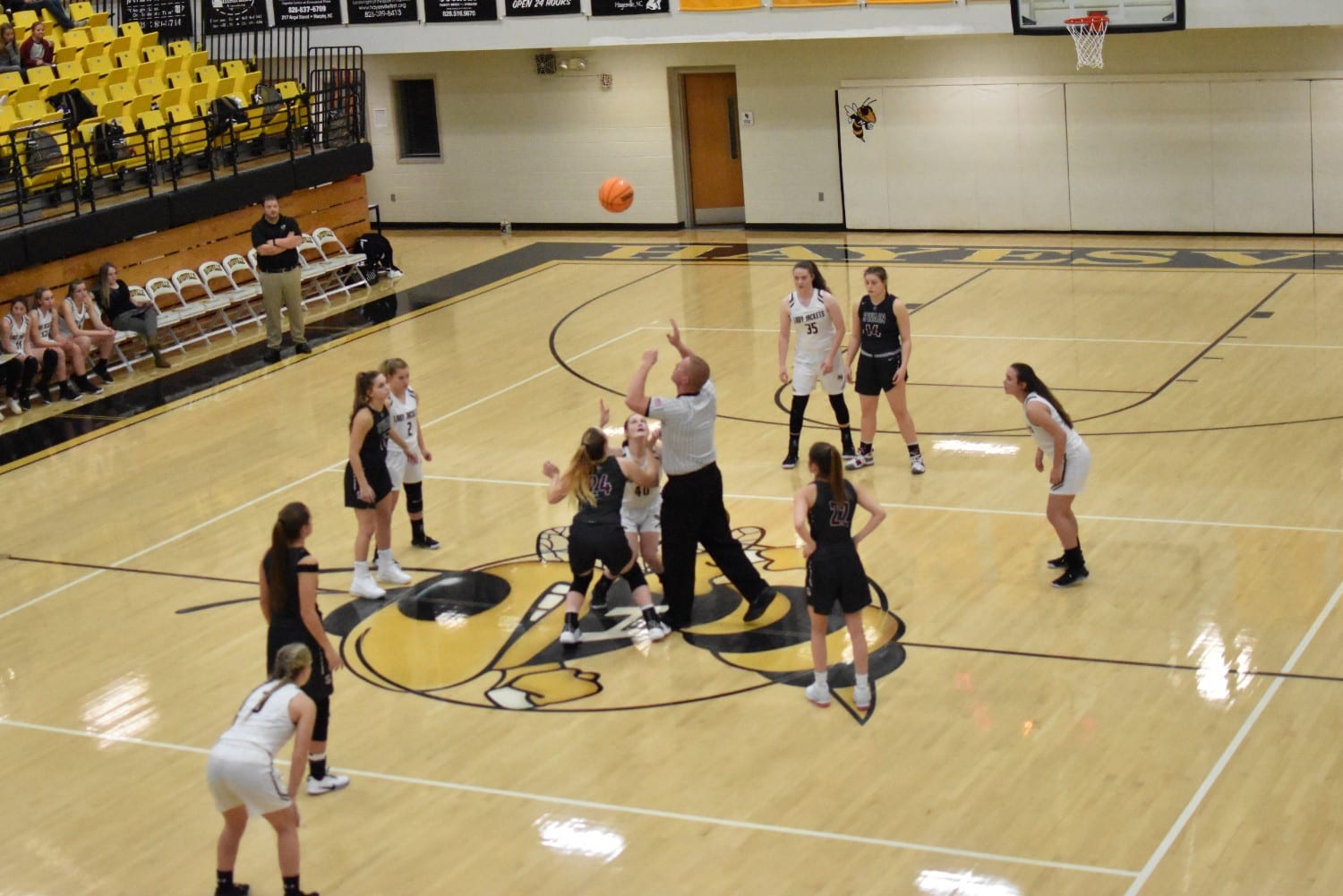 In the first game of the week, Hayesville host the Highlands Lady Highlanders in their first of two matchups this year. Hayesville was plagued with what has hurt them many times this year, a slow start scoring only two in the first quarter. The Lady Yellow Jackets did not give in though and showed some grit. They battled back to take a two point halftime lead knowing they were going to have to battle it out in the second half.

The second half was filled with lots of fouls and some ugly playing on both sides. Yet with some good defense on the final possession Highlands missed a contested jumper that would have won the game as time expired. It does not have to be pretty though and sometimes winning on an off night says more about a team than it does when they are playing their best. The Lady Yellow Jackets won 38-37 and got right back to work having the play again the next night.

In their second game of the week they played a tough opponent on the road, the Hiwassee Dam Lady Eagles. The Lady Eagles had some of the best post player size that Hayesville had seen all year. That mattered little to Junior Brianna Foster though, even with giving up several inches to her opponent she had a big night scoring the ball. Foster led the way for the Lady Yellow Jackets with a double double of 16 points and 11 rebounds. Senior Jade Patterson also had a great night scoring 18 points all from three point land going an outstanding 6 for 11. This all combined to give the Lady Yellow Jackets a 56-49 win.

To end the week the Lady Yellow Jackets faced the Andrews Lady Wildcats in a conference game. It was easy to see early on the Jackets were a class above their opponents and would win easily. Hayesville was led by Junior Brianna Foster who had 17 points to go along with 7 rebounds. Hayesville cruised to a 51-22 victory, going a perfect 3-0 for the week. The real story of the night though, was the outstanding ceremony for former Lady Yellow Jackets star Amanda Thompson. She was honored with having her number 20 jersey retired and to never be worn by another Lady Yellow Jacket.

Their first game at Cherokee on Tuesday night will be one of their toughest games of the year. Playing at Cherokee never presents an easy matchup for any team. Cherokee not only has a talented group of players, but it always seems that playing in their gym presents a unique environment. Cherokee is 8-4 overall this year and 3-1 in conference play. This game will put the winner in sole possession of second place to this point in the season. Even though there is lots of basketball to be played, this is the type of game where the winner very well may end up having the chance to host in the playoffs. As far as common opponents go, one worth mentioning is that Cherokee has lost to Robbinsville while Hayesville beat them. That is a good starting place to show that the Lady Yellow Jackets definitely can win this match up if they play well.

In the Lady Yellow Jackets second game of the week they will host the Nantahala Lady Hawks. Nantahala is 1-13 overall on the year and as happens with small schools at times are in a rebuilding period. They only have one senior on the team, are very young, and are continuing to grow. This is the Lady Yellow Jackets second matchup with them this year having won the first 73-7.